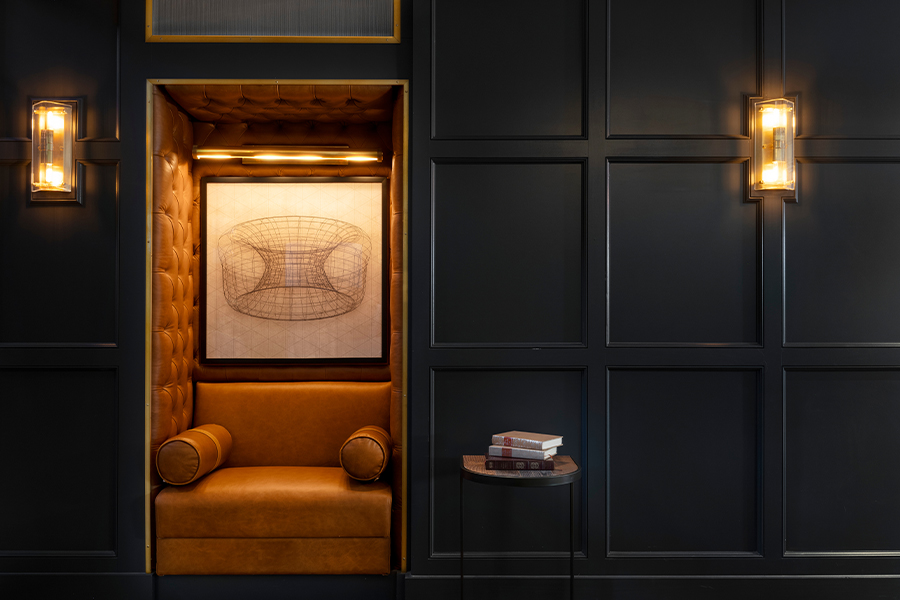 Stained-glass windows, regal arches, and swaths of patinaed wood lend the Purdue Memorial Union, the heart of student life at Purdue University in West Lafayette, Indiana, a stunning “Gothic Revival feel,” says Gina Deary, co-owner of Simeone Deary Design Group (SDDG). When the Chicago firm was tasked with the $35 million-dollar revival of the Union Club Hotel, built as an addition to the union building in 1929, Deary knew it would be impossible to “ever recreate that gorgeous old palette.” Instead, she and her team interpreted it through a contemporary lens.

Last spruced up in the 1980s, the 182-room property, now managed by White Lodging (founder Bruce White is a Purdue alum), will also serve as a hands-on laboratory for students in the School of Hospitality and Tourism Management. Celebrating Purdue’s culture and heritage as a 19th-century public land-grant research university was important to Deary, who forged a design interplay between the social hub (SDDG was granted permission to use a portion of it for F&B programming) and the hotel. 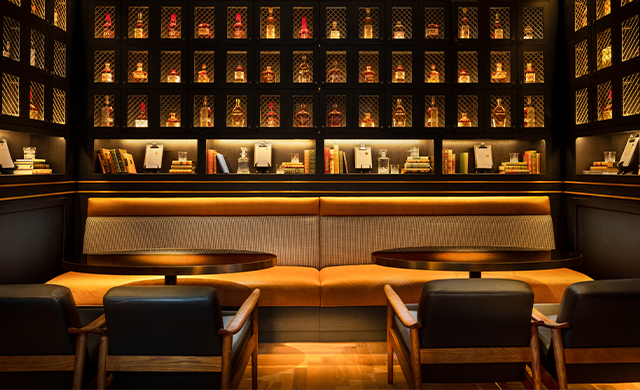 A vast, illuminated whiskey display lends a gallery feel to the Boiler Up Bar

Paneling is painted a rich charcoal, and the mosaic floor that leads to the Imperial Danby marble front desk nods to the cross pattern found in the union’s Great Hall. SDDG also invigorated Purdue’s signature color scheme of “Old Gold” and black with slate gray and “a peacock blue that pulls out all the inherent beauty in natural wood,” Deary points out.

In collaboration with Kevin Barry Art Advisory, SDDG showcases Purdue’s legacy through artwork reflecting five different pillars: the mind, the land, the man, the machine, and the might. For example, images of Amelia Earhart, who was on staff at Purdue in the 1930s, are projected onto a two-story bookcase filled with white tomes at reception. 8Eleven bistro, with a display kitchen flanked by glass, features a collage of more than 600 pieces of wood delineating the vast campus, and vintage photography culled from archives appears in the guestrooms. 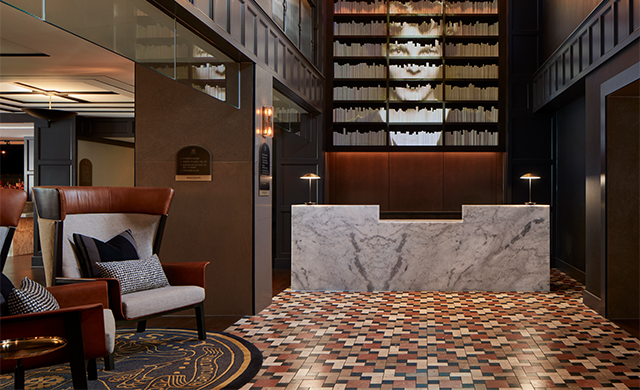 Historic photos of Amelia Earhart, who acquired her Lockheed Electra plane with funds from the Purdue Research Foundation, are projected against a bookcase at reception

Agriculture, engineering, and athletics, all well-regarded at Purdue, also take centerstage in the lobby, with framed sketches of topographic forms and a bronze-finished sculpture of a boilermaker—the namesake of the football team. Retro sports equipment adorns the lobby lounge and a large-scale chemical diagram adds an academic air to the lobby bar.

Playful, nostalgic touches, including artifacts on display and crest-shaped vanity mirrors in guestrooms, along with all of the furniture and finishes are “informed by the mystique of an excellent university,” says Deary. “There’s a studious element. The brown leather, the tweed, the plaid, the houndstooth—it’s like your fantasy of college.” 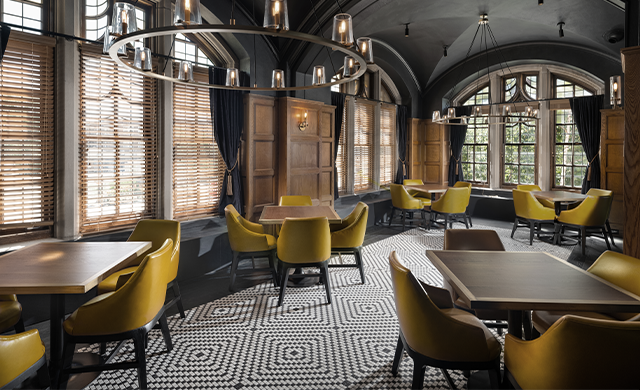