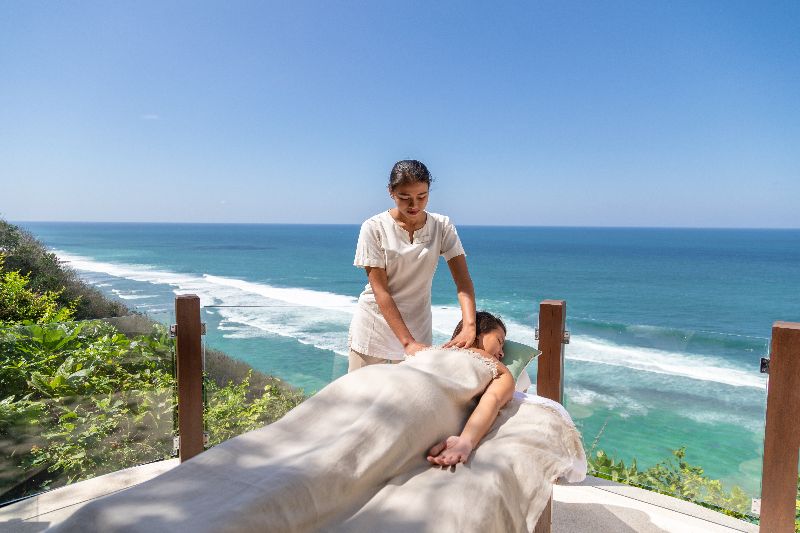 While a devotion to luxury has long been at the forefront of Uluwatu’s Karma Kandara, a passion for wellness has come a close second. 2020 cements its dedication to wellbeing with a series of new offerings at the Bukit Peninsula resort.

A new beachside yoga bale has just been unveiled – an open-air meditative space which will become home to a series of new yoga and holistic health-focused offerings for both in-house guests and visitors, with the crystal-clear waters of Uluwatu within arm’s reach. A team of local teachers, handpicked by Spa & Wellness Curator and Chair of Sustainability for the Karma Group, Judy Chapman and the spa team, lead classes of Ocean Yoga Flow here twice a week, accompanied by 180-degree uninterrupted views of the Indian ocean. This isn’t the only yoga class on offer at Karma Kandara – the resort’s yoga ambassador Ola Lirka visits regularly to lead twice-daily Yoga, Rise & Shine, HIT Yoga, Yin Yoga, Mother and Daughter classes and more.

Joining Ocean Yoga Flow in the bale is a series of more strenuous offerings for those with energy to burn. Core Balance by the Sea has just been introduced – a Pilates-infused class strengthening the core, improving posture, balance and self-confidence. Those more tempted by healing treatments will be able to enjoy the addition of Seaside Sound Healing Journey, a therapy used to gently lull you into a meditation for true restoration. Teacher Liz Tara Sundri Kaur incorporates singing bowls, gongs, drums and instruments in her soothing sessions, alongside live chanting of mantras.

Each offering is led by an experienced practitioner, hand-selected for their unrivalled understanding of the field. “‘We’ve collaborated with the island’s best Balinese yoga and practitioner experts – they are all exceptional in their craft,” explains Judy of the new teaching staff that form the wellness offerings for Karma Kandara in 2020.

Karma Group is an award-winning international travel and lifestyle brand offering extraordinary experiences in the world’s most beautiful locations and is headed by Chairman and Founder, John Spence, former Ernst & Young Entrepreneur of the Year and member of the judging panel for the Ernst & Young World Entrepreneur of the Year. John has been honored by being awarded the Edward P. Bass Honorary Fellowship at Yale in the Fall Semester of 2019 in the School of Architecture, marking the first time Yale has extended this to the same person more than once. He has also been awarded a Distinguished Visiting Fellowship at UCLA as well as working with students from the University of Pennsylvania to design a chateau development in Carcassonne.

The Karma Group is comprised of Karma Resorts, Karma Retreats, Karma Royal, Karma Estates, Karma Beach, Karma Spa and Karma Boutique. The Group is currently operating 33 resorts in more than 10 countries, including Australia, France, Germany, Greece, India, Indonesia, Thailand, Vietnam and the United Kingdom. There are currently five properties in development and the Group is negotiating three separate acquisitions in Scotland (a golf resort), Cyprus, and Bulgaria. In 2016, Karma group and Sanctum Hotel Group announced a joint venture to develop a series of authentic rock ‘n’ roll styled and orientated hotels in strategic locations around the world, accompanied by an exclusive private membership club, now with over 85,000 members. In 2017, Karma were awarded the contract to manage and develop the golf course on Rottnest Island in Western Australia and in Greece, RCI, the worldwide leader in vacation exchange, selected Karma Group to manage its operations in the Greek market whilst redevelopment began on Karma Minoan in Crete. Karma Group is a sponsor of the England Rugby 7’s team, as well as the Rosslyn Park HSBC National Schools Sevens, the world’s largest school rugby tournament. Karma Group recently invested in its first racehorse with a view to future expansion of its stable.