Heal from within courtesy of Karma Resorts’ new spa treatments 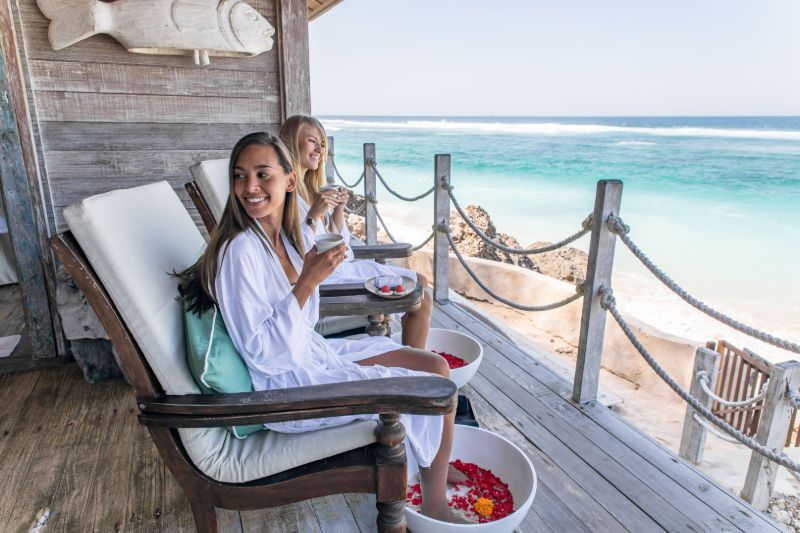 Sound baths, facial yoga and retreats among more have arrived at the luxe group’s trio of Indonesian resorts.

Karma Group has amassed a reputation for the luxury amenities available at its resorts, but just as important to the famed hotel group’s dedication to opulence is its focus on wellbeing. Health and wellness remain integral to Karma Group, particularly across its three Indonesian resorts where a burgeoning array of healing treatments continue to grow on offer via Karma Spa.

Taking inspiration from the spa trends sweeping the globe, Karma Spa has introduced a number of new offerings intended to heal the body and spirit. Sound baths are now incorporated into the resort’s treatment list, having been combined alongside most massages as well as the monthly Full Moon Yoga held at Uluwatu’s Karma Kandara. Think a concoction of seaside sound bath chanting performed alongside a series of different yoga poses. “Sound is the new massage,” explains Judy Chapman, Karma’s Spa & Wellness Curator of the booming sound healing trend. Balinese Reiki, intuitive tarot readings and acupuncture will shortly also be welcomed across both of Karma’s Balinese resorts, performed by an expert in the field.

A special new detox retreat has also joined the treatment array at Karma Jimbaran. The four-day retreat is designed to gently cleanse the body of mental clutter and rest the body with specialised yoga, massage, and niche treatments like deep tissue and IV infusion therapies.

For those who like something a little more intense, ‘Train Like An Athlete’ have arrived in the fitness studio, with a series of ambassador-led workouts. This will join the burgeoning social workouts which encourage guests to band together; at Karma Kandara guests are encouraged to join the hotel twice a week to walk up and down the 350 steps to Karma Beach. Karma has also collaborated with multi-disciplinary DJ Vanessa Holiday leading ‘Yin Yoga and Seaside Soundbaths, the first of these will be held at our Gili Meno resort.

Vanessa leads ocean flow yoga followed by a sacred sound bath, which sees chanting mingle with crystal singing bowls, Tibetan Bowls, Native American Flute, Gongs and Drums – all designed to nourish and replenish the body, physically and mentally. Guests after something a little less physical will find it with the arrival of the Karma Yoga Facial, which blends deep facial massage release, with lymphatic drainage and ayurvedic marma-point therapy in the spa. This will roll out across the Indonesian Karmas and Australia’s Karma Rottnest alike, joining the brand new Infrared Sauna Suite, which will shortly launch Down Under.

Proving increasingly popular to guests eager to detoxify, the Infrared Sauna Suite is available for use alongside a sauna ritual menu, which sees it form a part of a more indulgent treatment which can vary from magnesium salt scrubs to reflexology.

More information on Karma Spa’s ever-evolving array of new healing offerings can be found at: www.karmagroup.com

Karma Group is an award-winning international travel and lifestyle brand offering extraordinary experiences in the world’s most beautiful locations and is headed by Chairman and Founder, John Spence, former Ernst & Young Entrepreneur of the Year and member of the judging panel for the Ernst & Young World Entrepreneur of the Year. John has been honored by being awarded the Edward P. Bass Honorary Fellowship at Yale in the Fall Semester of 2019 in the School of Architecture, marking the first time Yale has extended this to the same person more than once. He has also been awarded a Distinguished Visiting Fellowship at UCLA as well as working with students from the University of Pennsylvania to design a chateau development in Carcassonne. The Karma Group is comprised of Karma Resorts, Karma Retreats, Karma Royal, Karma Estates, Karma Beach, Karma Spa and Karma Boutique. The Group is currently operating 33 resorts in more than 10 countries, including Australia, France, Germany, Greece, India, Indonesia, Thailand, Vietnam and the United Kingdom. There are currently five properties in development and the Group is negotiating three separate acquisitions in Scotland (a golf resort), Cyprus, and Bulgaria. In 2016, Karma group and Sanctum Hotel Group announced a joint venture to develop a series of authentic rock ‘n’ roll styled and orientated hotels in strategic locations around the world, accompanied by an exclusive private membership club, now with over 85,000 members. In 2017, Karma were awarded the contract to manage and develop the golf course on Rottnest Island in Western Australia and in Greece, RCI, the worldwide leader in vacation exchange, selected Karma Group to manage its operations in the Greek market whilst redevelopment began on Karma Minoan in Crete. Karma Group is a sponsor of the England Rugby 7’s team, as well as the Rosslyn Park HSBC National Schools Sevens, the world’s largest school rugby tournament. Karma Group recently invested in its first racehorse with a view to future expansion of its stable.