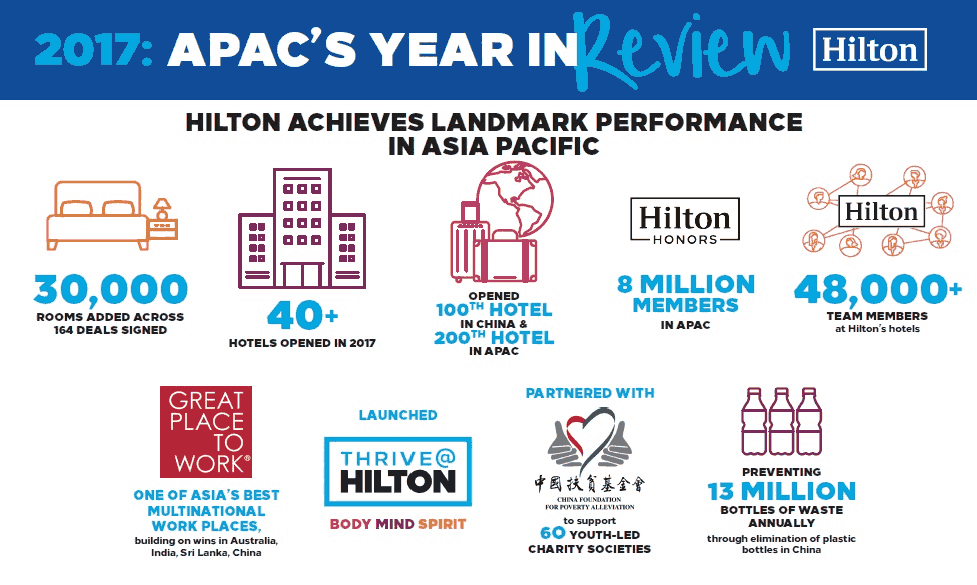 Over 40 hotels opened in 2017 as 30,000 new rooms signed and Hilton looks toward another milestone year of innovation under new leadership

SINGAPORE – Jan. 29, 2018 – In 2017 Hilton (NYSE: HLT) achieved landmark growth and expansion in Asia Pacific, while introducing industry leading guest innovations and being recognized as as one of Asia’s best multinational workplaces. Having recently appointed Alan Watts as its new Executive Vice President & President, Asia Pacific and Qian Jin as the first Area President for Greater China & Mongolia, the company is looking ahead to an even bigger year in 2018.

The year marked extensive expansion in the region with the opening of more than 40 hotels, including the 100th hotel in China and the 200th hotel in Asia Pacific, plus the introduction of the Curio Collection by Hilton brand in China and Australia.

The company’s strong workplace culture, which includes the launch last year of [email protected], was rewarded by Great Place to Work awards in key countries and Asia-wide. Meanwhile, having welcomed more than 10 million guests throughout the year, 2017 saw the roll-out of the revolutionary Digital Key, continuing the company’s legacy of guest innovation in the industry.

“It was an amazing year of further growth for Hilton in Asia Pacific in 2017, coupled with recognition of our position as a market leading employer and the most innovative in our industry,” said Watts. “Travel and tourism continues its rise to become a leading employer and contributor to Asia’s economy and we are at the forefront of a trend that will see us create hundreds of thousands of jobs across the region in future years.”

“Having recently joined the company on the back of such impressive results, I have great confidence that 2018 will propel us to an even higher level, as we begin the countdown to Hilton’s 100th Anniversary in 2019,” he continued.

In 2018, Hilton is set to continue its rapid expansion, including the opening of Waldorf Astoria Bangkok, marking the luxury brand’s arrival in South East Asia. Already this year the company has opened its second luxury property in India, Conrad Bengaluru. Having enhanced its leadership team in China in 2017, the company has also recently appointed Navjit Ahluwalia as Senior Vice President and Country Head, India.

About Hilton
Hilton (NYSE: HLT) is a leading global hospitality company, with a portfolio of 14 world-class brands comprising more than 5,200 properties with more than 856,000 rooms in 105 countries and
territories. Hilton is dedicated to fulfilling its mission to be the world’s most hospitable company by
delivering exceptional experiences – every hotel, every guest, every time.

The company also manages an award-winning customer loyalty program, Hilton Honors. Hilton Honors members who book directly through preferred Hilton channels have access to instant benefits, including a flexible payment slider that allows members to choose exactly how many Points to combine with money, an exclusive member discount that can’t be found anywhere else and free standard Wi-Fi.